This week we completed a powerflush in cheadle hulme on a normal indirect system in a three bed bungalow ,two of the radiators in the lounge were just not geting hot and the 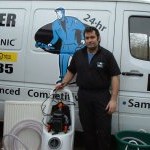 lovely elderly lady in the property said they had been like that for years and was actualy having to use a fan heater in that particular room,,so we got to work on the system ,,,also its worth mentioning that this customer had a british gas contract and we actualy done the job for 50% cheaper that she had been quoted ,,the water in the system was completely black ,iron oxide sludge the magnaclean magnet was full of iron sludge in the powerflush machine,we cleaned the header tank out in loft and also fitted a new ballvalve as this one was not working as it shoud ,we also noticed that the overflow had been knoked off so we put this rite at no extra cost ,,the one problem we did infact have with this particular system was that it was hard to bleed after the powerflush and infact took us several hours to bleed the system,,the reaon for this was because the boiler had been moved from loft space into garage wich was a long way from the header tank with supply pipes runing basicly vertical ,also some high bleed valves were not working correctly so we had to replace them ,,we got it sorted in end and on walking into the lounge were customer was sitting she said to me …barry ,i can feel the heat coming from the radiators and i havnt felt that in years !  ,,another satisfied customer ,,,thank you barbara in cheadle hulme

Get a FREE Quote Below